The Installation Ceremonies included a symposium on  Preaching, Performance, and Public Space in Medieval and Early Modern England, and included the following speakers:

Anne MacNeil, History of Music, UNC – Chapel Hill, “The Way-Back Machine: Digital Tools for Study of the Distant Past”

For media coverage of the Opening Ceremonies, go here and here.

The heart of the Installation is a 6 minute video of the Visual Model of Paul’s Cross. To see this video, go HERE.

Part of the Installation is a video in which Wall and Hill discuss the creation of the Virtual Paul’s Cross Project. To see this video, go here:

To see a video made during the Opening Ceremonies for the Installation, go here:

We begin each demonstration of the Installation by showing this image of how the east end of Paul’s Churchyard, in London, looked in early September of 2013.

This part of today’s London is a retreat from the hustle of commercial and legal London just outside the Churchyard.

We then notice the arrangement of stones just north of the northeast corner of Wren’s cathedral, with this inscription in the middle.

This is the only reminder in the Churchyard that 400 years ago this space was not a retreat, but a space — the largest open space in early modern London — at the heart of religious and commercial London.

But if we could step back, over the intervening years, to Paul’s Churchyard, on November 5th, 1622, this same view might have looked something like this.

Were you there on November 5th, 1622, at about 10:00 in the morning, you might have heard something like this:

Paul’s Churchyard in 1622 was an active burial ground, the center of the English book trade, surrounded by mixed use buildings with book sellers’ shops on the ground floor and living space above, and the space through which Londoners in large numbers moved on their way from the space to the south of St Paul’s to the space to the north.

Their movement was facilitated by a passageway through the nave that ran from north to south. Access from one side of St Paul’s to the other today is impeded by the absence of any such passageway, with access to the interior essentially limited to the west end.

Paul’s Churchyard was the obvious choice to site an outdoor pulpit. The space in front and to the sides of the Paul’s Cross Preaching Station could hold as many as 5000 or 6000 people.

Thanks to the acoustic properties of this space, a preacher with basic skills in public speaking could be heard anywhere in the Churchyard, so long as he had the attention of the crowd. 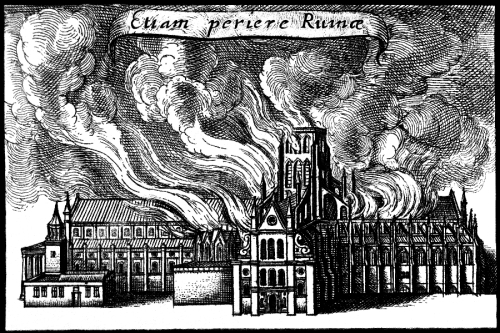 That time is separated from St Paul’s and Paul’s Churchyard by 400 years of change, but especially by one significant event, the Great Fire of London, which broke out in a bakery in Pudding Lane in the early hours of Sunday, 2 September, spread rapidly through the City of London, reaching and destroying St Paul’s on Tuesday, 4 September, before burning itself out on Wednesday, 5 September 1666.