Listen from the Cross Yard 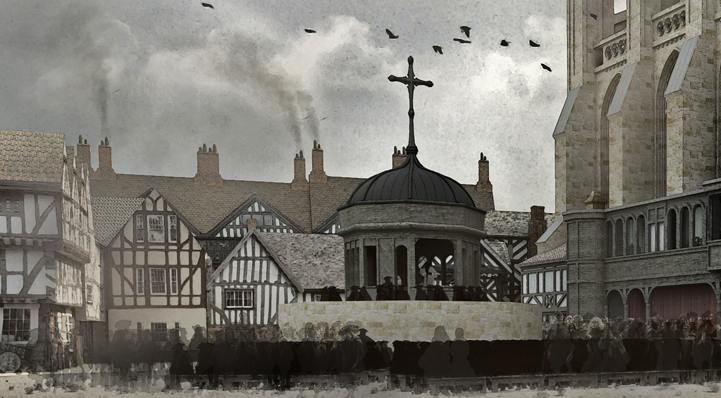 Figure 3: Paul’s Cross from 50 feet away. From the Visual Model, constructed by Joshua Stephens, rendered by Jordan Grey.

TRACK TWO — Announcement of the Text, jab at Catholics for lack of biblical skills, discussion of whether the text is historical or prophetical, or both, a “prophetical history, and . . . a historicall prophecy,” recounting the past and accounting for the future, concerning authority of kings, claiming that kings, whether they be good kings or bad kings, are anointed of the Lord.

TRACK THREE —  Links King and Kingdom, promises a beginning in lamentation will grow “an howre hence to be a congratulation,” says monarchy is the best form of government, says God always intended Israel to have a monarchy but had his own timetable, says Israel at fault for asking for a King before God was ready to give them one.

TRACK FOUR — Discusses decline of Israel, linked to death of Josiah, a good king, and the transportation into captivity of Zedekiah, a bad king, also linked prophetically to the kingdoms of the British Isles, “destind by them to Desolation in one minute,” role of the Pope, treason justified by Catholic skill at lying, Catholic plan to destroy the kingdom by severing the king and his kingdom.

TRACK FIVE — Claims attack on the kingdom by attacking the king was treason because it was a rejection of king’s authority, and rejection of a good king, like Josiah, behavior typical of Catholics, like their attack on Queen Elizabeth, “our Deborah,” yet even if James were a bad king, like Zedekiah, his loss would still be lamentable.

TRACK SIX — Says that claiming a king is an ill king is risky, that people do so far to easily, that a king is the breath of our nostrils, God’s agent, that we are commanded by God to be faithful to our king, to speak well of our king, for “they are our breath; our breath is theyrs, in good interpretations of their actions.”

TRACK SEVEN — Says we should pray for kings, defends James against charges that he is soft on Catholicism, says we should “interpret fayrely and loyally his proceedings,” give our lives for his honor, but our souls to God, says James is a “good text man”

TRACK EIGHT — Questions how the plotters though of James, for it is not “good Physicke . . . to cut off the head” because one dislikes the breath, the breath of the nation and the anointed of the Lord is owed loyalty, not treason, the Catholics are likely, based on past precedent, to try this again, our James is like Josiah, like Zedekiah, n that he, like them, was taken “in the pitts”

TRACK NINE — Notes that while Josiah and Zedekiah, both a good and a bad king, were taken and killed “in the pitts,” God showed mercy to our Josiah, our king, by sparing him, so we should amend our ways that God will continue to have mercy, by preserving James, by returning to God, by “repentance for former, and abstinence from future sins,” by obedience to James, by y making sure our children do right, so that “every man keepe his own family, and then every pastor shall keepe his flock, and so the Church shalbe free from Schisme, and the state from sedition, and our Josiah preserved.”