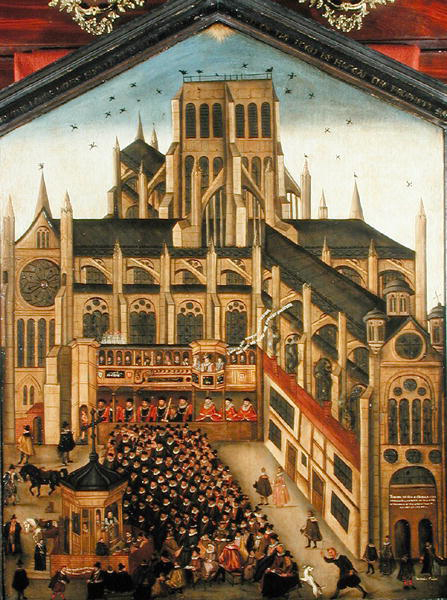 This page holds links to two complete recordings of Donne’s Gunpowder Day sermon for November 5, 1622. Both replicate, in effect, the setting Gipkin shows us, with about 250 or so people in attendance.

Each performance is presented in two formats. The first set of recordings gives us the complete, uninterrupted sermon, with the prefatory prayer, all the way through to the end, a recording of about 2 hours and ten minutes.

The second set of recordings gives us the same experience, though broken into nine segments of approximately 15 minutes each. All these segments end with the sound of the cathedral’s clock bell, a bell struck by mechanical hammers to toll the hour or the quarter hour.

In this version, one can listen to the nine segments sequentially or individually, making the sermon performance more accessible.

Set One.1: The Sermon from The Cross Yard

Figure 2: Paul’s Cross from 100 feet away. From the Visual Model, constructed by Joshua Stephens, rendered by Jordan Gray.

In this recording, we hear the sermon at ground level, about 100 feet from the preacher, as we sit or stand with those who also have gathered on this cloudy, chill November day to hear Donne preach this sermon. We are perhaps wrapped in a heavy cloak against the chill and damp of a November day in London.

We are at ground level, approximately in the spot indicated by the red dot in the above diagram of Paul’s Churchyard. Depending on the size of the crowd, we may be standing among “the meanest Sonnes of thy sonne, in this Assembly,” in the area behind the seats.at the back of the crowd.

To hear the sermon from this listening position in 15-minute segments, go here:

RECORDING ONE: Listen from the Cross Yard

Set One.2: The Sermon from the Sermon House

Figure 4: Paul’s Cross, as seen from the Sermon House, From the Visual Model, constructed by Joshua Stephens, rendered by Jordan Gray.

The second recording places us higher up, above the crowd, in the Sermon House in the box for the most distinguished guests. In Gipkin’s painting, this person is supposed to be James I, in a scene from 1616, a royal visitation to which Donne makes reference in his Gunpowder Day sermon (“he visited these walls”).

On November 5th, 1622, however, the person sitting in this box (“the Lieutenant of thy Lieutenant”) was likely to have been the Lord Mayor of London, in early November of1622 Sir Edward Barkham, a member of the Worshipful Company of Leathersellers and Master of the Drapers Company who had served as Sheriff of London in 1611-12 and who had been knighted on June 16, 1622.

To hear the sermon from this listening position in 15-minute segments, go here

These two positions have been chosen as listening positions because they represent two ends of the social scale among the crowd gathered to hear Donne’s sermon but also because they seem to represent the two most dramatically different positions in terms of acoustics.